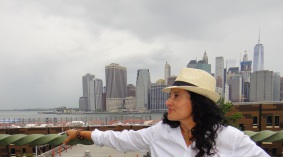 Catalina’s parents emigrated from Ecuador in the 1960’s and settled in New York’s Spanish Harlem, where she was born and raised. Her musical influences are many: the Latin American folk songs her mother sang in the kitchen, the pop and classical music her father played on the Hi Fi (Segovia, Sinatra, Doris Day), and the sounds of Motown and Disco her brother would spin on his turntables. In Spanish Harlem music was everywhere: Salsa blaring from the neighbor’s window; ghetto blasters and automobiles with super sound systems blasting the latest Cheo, Lavoe, Celia, Puente, R&B and Rap. Surrounded by music, Catalina has been singing all her life. She is grateful to have grown up in such a vibrant and dynamic atmosphere. It is exactly this colorful, musical world that she wants to share with her audience when she sings.

The native New Yorker brought her music to Germany in 1987. She is married with two children and lives in Wiesbaden.

Catalina and the FAB Band